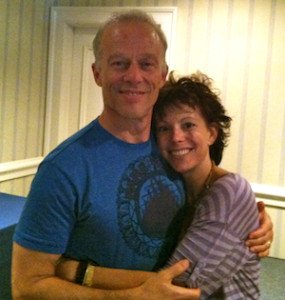 Get a glimpse beyond the stereotype of Tantra in this interview with ParaYoga teacher Rod Stryker. Jeanne interviewed Rod for the March 2007 issue of Yogi Times magazine.

When we think of Tantra we think of sex and imagine that it has to do with esoteric practices which make sex better, but it’s not articulated how or why. It’s all a mystery, a deep, dark secret that most of us would love to learn. Talking to Rod Stryker about Tantra and Yoga actually brings more clarity to this mystery. Rod has been teaching Tantra, Meditation and Hatha Yoga for more than twenty-five years. While now world-recognized, he started studying and teaching here in Santa Monica, becoming a top instructor at Yoga Works in the 1990’s. Rod then began traveling world-wide and developed a system of Tantra close to the origins, called Pure Yoga. He continues to travel and now lives on a farm in Colorado with his wife and two children. We spoke over the phone on a break from writing his first book.

Rod explained that the notion of sex defining Tantra came about only recently. According to him, in the late 70’s/early 80’s, some Western teachers began offering “spiritual” sexual practices which they called Tantra; although they really weren’t being accurate. These practices in the scope of Tantra are called Maithuna, meaning “to make two, one.” “Maithuna was originally developed as a method to awaken spiritual consciousness using sexuality and sensual intimacy.” It is one of many practices in the Tantric discipline and to separate it apart from the whole decreases its effect and power. Rod explained that many of these Western teachers had not properly studied Tantra from a learned master but took the sexual hook and ran with it to make money, or other selfish reasons. “Rather than teaching people how to discover the immense and extraordinary life that is possible through real and lasting self-realization, many teachers promoted orgasms – how to have as many as possible (for a woman) or none (for a man.) It would have saved confusion if what they were teaching was simply called by its real name.”

OK. So, all Tantra is not sex, and sex in the Tantric world is Mathuna. So, what is Tantra then? Tantra in Sanskrit means “to weave”. It describes the weaving of fabric or tapestry from the ancient times. With Tantra, one attempts to weave spiritual experience throughout daily life, instead of keeping them separate. It doesn’t ignore urges but rather, embraces them and helps us use them wisely to live our lives more fully. In Tantra, one weaves practices of yoga postures, breathing techniques, energy locks, meditation, chanting, Kundalini, Astrology, and many others, including Maithuna. The lesson is that all aspects of life are sacred, not just our yoga practice, but our householder activities, our work, and our relationships. The practices are used to help each of us shine brightly and find more joy in our life.

Rod broke Tantra down even further. He explained that in the big picture of Tantra there are two schools, the Right Handed Path and the Left Handed Path. Both have similar goals, “the realization of spiritual and worldly abundance,” but are different in their approaches.

“The Left Handed Path emphasizes more external ritual and is weighted more towards Bhoga,” sensual enjoyment, and focuses more on delighting the senses. Maithuna fits in here as a Left-Handed practice. However, what most don’t know is that the approach is very methodical, even mechanical and tedious. “Think of it as a sexual version of a model airplane kit – lots of pieces that you have to put together precisely,” for the end result. While some people can find a spiritual awakening, he warned that, “another downside to this approach is that exaltation is temporary,” for there’s no training for long term effects.

The Right Handed Path “emphasizes integration….how to sustain a heightened state for as long as possible. This is done through breath, postures, energy cultivation, and at some point, developing a deeper reverence for life.” He explained that while the Right Hand might seem less exciting of the two at first, its power is longer lasting. “If you are practicing the Tantric approach to yoga, you bring the practices with you when you make love and the experience will become spontaneously ecstatic and heightened.” And he explained, by following the Right Handed Path, all experiences in life “become more profound and sublime,” not just what happens in the bedroom. In his advanced trainings, for sincere students who are interested in the big picture, Rod addresses the practices of Maithuna.

Tantra found Rod found rather early in life. In his early 20’s he practiced out of Iyengar’s book, Light on Yoga until a friend took him to a Kundalini class at the Guru Ram Dass ashram (on Robertson), where he practiced for two years. Then, in April of 1980, another friend took him to a class by Alan Finger and “shortly after I started studying Tantra, my flexibility started to increase really fast.” It was clear that the Tantric practices were making a huge difference. His body began to change and “postures started to unfold spontaneously” that normally would not have happened unless he had practiced for 2-3 hours. After 6 weeks of dedicated study with Alan he was initiated into a lineage lead by Mani Finger, Alan’s father. Two months later he taught his first class and has been teaching ever since.

In 1987 Yoga Works opened on Montana Avenue and yoga started to increase in intensity with the introduction of Ashtanga. As Rod began studying with different styles and teachers, his practice and teaching became more athletic and challenging. Gary Kraftsow came later and brought the awareness of Viniyoga. “It validated what I knew before.” By the early 90’s his ego was fulfilled with accomplishing intense poses, (something he added was age appropriate,) while he noted that his personal growth hadn’t changed much. He also observed that personal growth in some fellow teachers hadn’t developed as their postures became more advanced. “I realized that it needed a different type of work besides doing accomplishing poses. I learned that less externally intense can be more powerful.” He chose not to abandon the athleticism, but to return to the source of Tantric teachings and eventually formed the basis for what is now called Pure Yoga.

The study of Tantra can be so vast and specific that it is encouraged to have a teacher as a guide. After 17 years studying with Alan and Mani, Rod felt that that his time was respectfully completed. He spent a few years looking for his next teacher and found that in Pandit Rajmani Tigunait, the successor to Swami Rama’s lineage and leader of the Himalayan Institute. “I’ve been around two great masters and had the opportunity to observe their immense power and enthusiasm. Once you are around that, it’s impossible not to aspire to be like them.” What’s it like for someone so accomplished as he when he started working with his new teacher? While it’s an intimate and personal subject for anyone, he revealed that what directly changed was his meditation. “After he initiated me, I realized that I had been preparing for twenty years to meet him and be part of the tradition of the Himalayan sages.” Spiritual awakening,” he explained, happens most often in a systematic manner and “for that you need the guidance of someone who has done the steps and then can lead you through them.”

He reiterated that the whole point of Tantra is to have more fun. “We do these practices to be more alive, to be more joyful and to be the most courageous that we can possibly be. It’s about life and are we moving to the other side of our fears, and learning how to live more fully? Can we change our shortcomings and increase our optimism and our sensitivity?” And how does a yoga master have fun when he’s not writing or traveling around the globe teaching others? On the mat it’s in Pascimottanasana, “everything is in that pose,” and Mayurasana, “energizing.” And off the mat it’s “spending time with my wife and kids, pottery and surfing.” Since it’s all part of the practice of Tantra, life as a whole becomes glorious.